In the days before Rabbi Yissachar Dov (1765-1843 -- the Saba Kaddisha) of Radoshitz became known as a rebbe, he was so poor that he often fasted because he simply had no bread to eat. One year he had eaten nothing for a few days before Yom Kippur, and even after the fast was over he has nothing better than meager rations of bread and water. Nor could he afford to prepare anything at all for the oncoming festival of Sukkot.

After the evening service on the first night of the festival he remained in the synagogue. He knew that at home there was nothing to eat. But he did not know that on the eve of the festival his wife has sold some modest item of jewelry that she had found among her possessions, and with the proceeds had bought braided challot and candles and potatoes.

When he decided that most people had by now finished eating in their sukkah and had probably returned to their houses, he left the synagogue and went home. Entering his sukkah, he was overjoyed to see candles and challot on the table. He washed his hands, recited Kiddush, and sat down to eat. By this stage he was well-nigh starving, so he ate the potatoes which his wife served him with a ravenous appetite.

While he was eating a thought flashed through his mind.

"Berel," he said to himself, "you're not sitting in the sukkah; you're sitting in your plate!"

And he stopped eating.

Check this out
stammed by mishmum at 10:56 AM No comments: 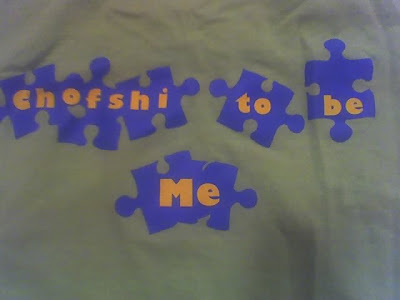 I AM SOOOO CURIOUS. Okay, not SOOOO ....but just curious.

The tzaddik Reb Yitzchok of Vorki once awoke in middle of the night and felt a desire to take a sniff of tobacco. While in bed, he was unable to reach the tobacco box and debated with himself whether to get up for it or not. If he would rise to get it, he would be giving the יצר הרע the opportunity of being able to convince him to fulfill his desires. Yet, if he would not get out of bed, he would still be giving into his יצר הרע by practicing laziness, a trait he might apply when serving Hashem. After weighing this in his mind, he decided, "I will get up and get the box, but I will not fulfill my desire to smell it."
(ילקוט ספורים)
stammed by mishmum at 4:34 PM No comments:

The holy tzaddik, the חידושי הרי"ם of Ger, would emphasize the greatness of Purim with the following episode:

There was once a Yid who set out on a journey, intending to commit a grievous עבירה, taking with him five hundred gold rubles which he had amassed. While traveling, he suddenly heard the heartfelt crying of a family in trouble; they were being evicted for not having paid their rent. His pity aroused, the Yid gave them all the money he had with him, with which he had planned to do the עבירה. A great tumult took place למעלה, and the verdict was made that whatever this man would decree would materialize. However, to ensure that this privilege not be misused, they decreed that he become a שיכור.

Once, a terrible צרה came unto the world, so the בעש"ט sent his talmidim to beg this drunk Yid to intercede and ask for רחמים. Arriving at his place, they found him שיכור, and had to try a number of times until they caught him before drinking. They presented their request and he successfully abolished of the גזירה.

The חידושי הרי"ם would conclude: Purim is a day of עת רצון, when every Yid can be פועל to no end, and the drinking should not disturb us from accomplishing what we need.
(שפתי צדיק אות נ"ג)
stammed by mishmum at 6:29 PM No comments:

"We do not see things as they are. We see them as we are." A belief is like a pair of sunglasses. When we wear a belief and look at life through it, it is difficult to convince ourselves that what we see is not what is real. With our sunglasses on, life looks green to us. Knowing what is real requires that we remember that we are wearing glasses, and take them off. One of the great moments in life is the moment we recognize we have them on in the first place. Freedom is very close to us then. It is a moment of great power.
stammed by mishmum at 10:00 AM No comments: 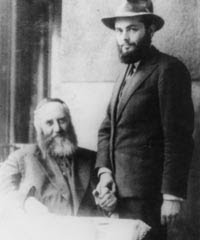